It has taken me forever to put these pictures together of the Rescue Round-up at Hershey last month.
There just doesn't seem to be enough hours in the day lately.

Just have fun looking at the pictures.

I made a collage of each groomer.
They are before pictures and pictures all during the competition.
Unfortunately I don't have pictures of each finished dog, just close to finished.

Why not any finished pictures?

I asked my son the same thing, because he was the one in charge of taking pictures since both Jess and I were competing.
He said that he did not get any finished pictures because it got too crowded up close to the stage, and they were asking for pictures to be taken after the Judging.

Even though he did not get finished pictures, I think that you will be able to see the beautiful work that these groomers did to help these dogs find new forever homes.

The competition starts with all of the groomers picking numbers and the matching those numbers up with a rescue dog. 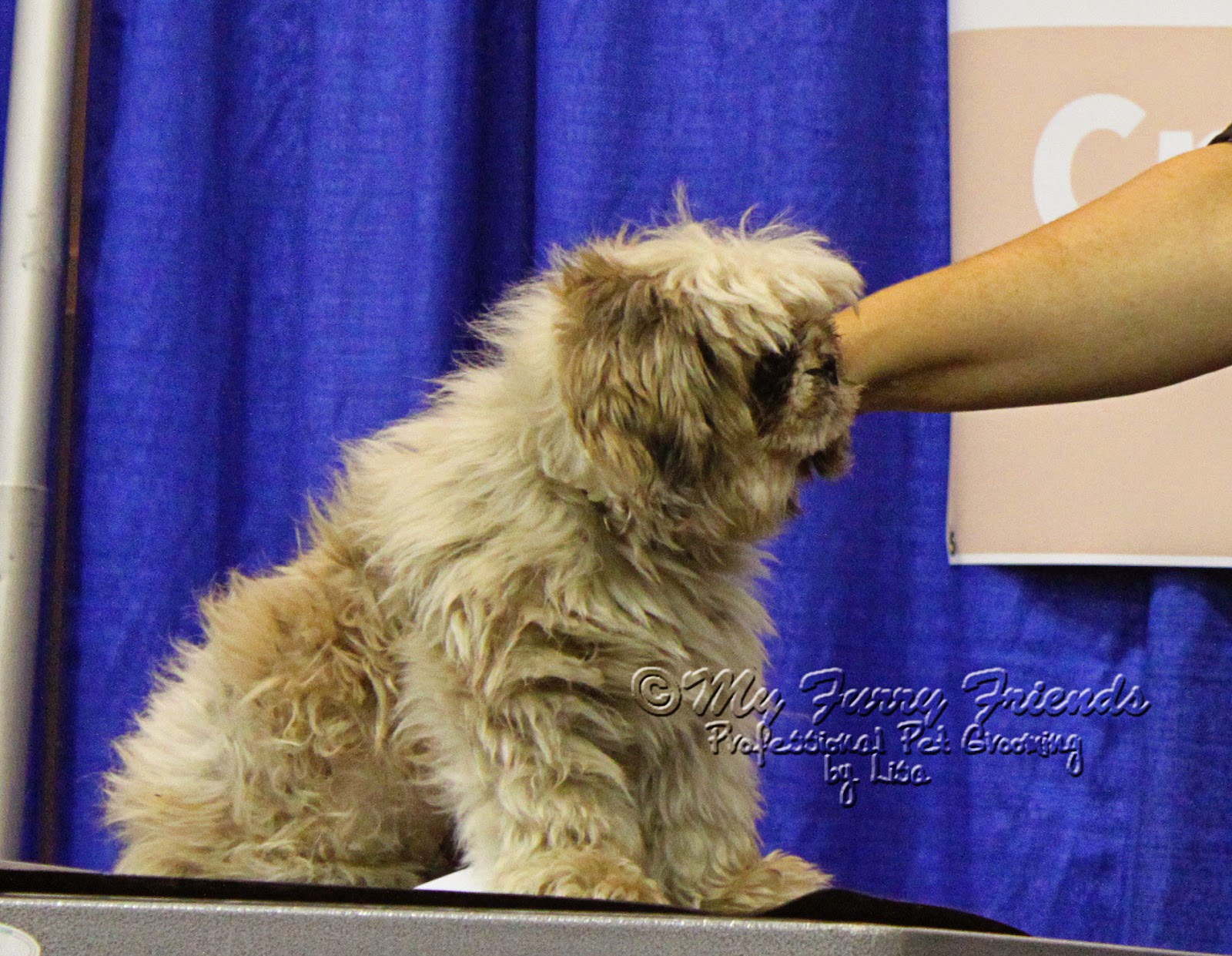 This was the little lady whose number that I picked.

She was very filthy and matted.

She was also very sweet. 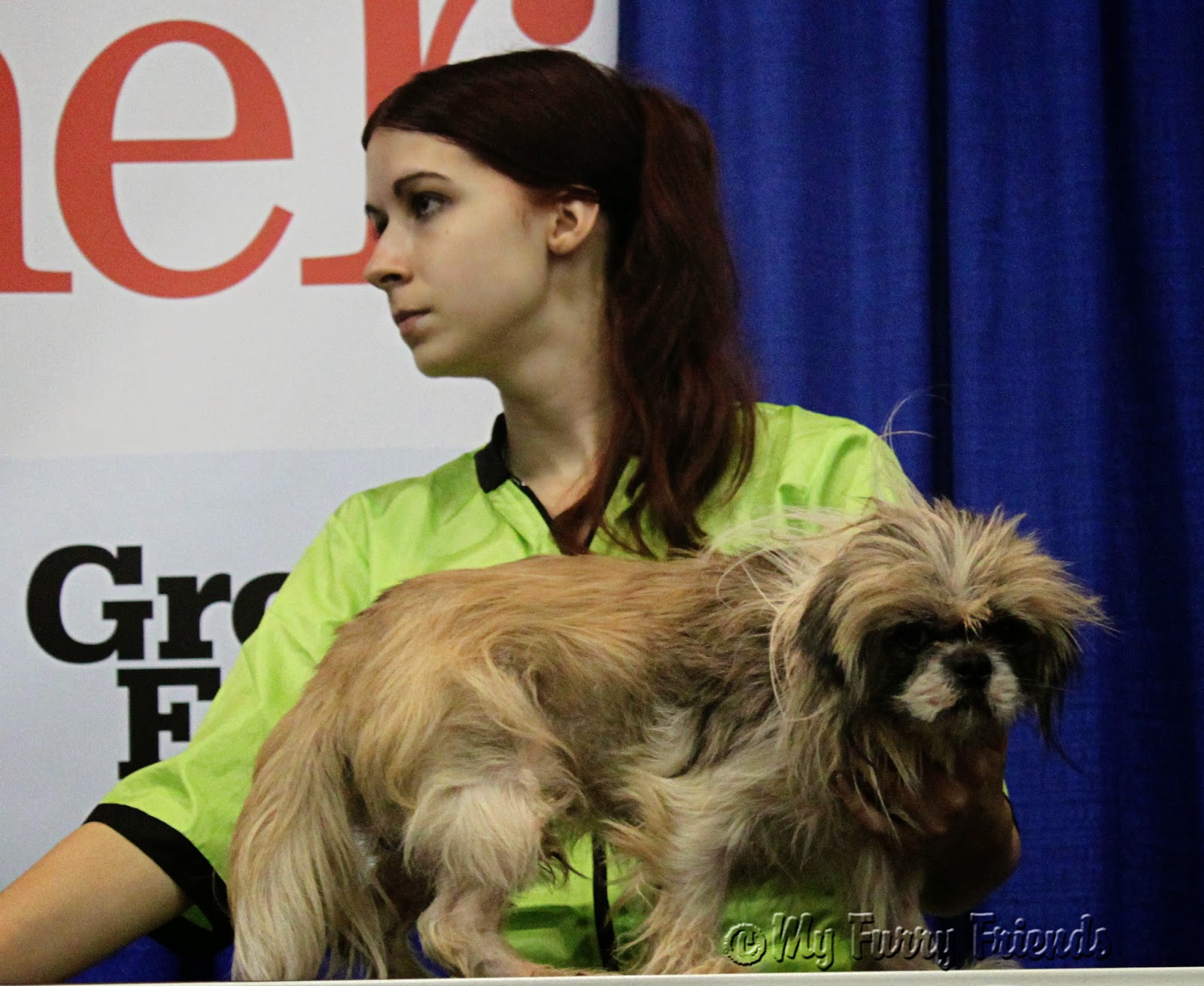 This was the little guy that my daughter got to groom.

He was a very young dog, but acted like a very old man.

His skin was in awful shape, and he was also filthy and full of fleas. 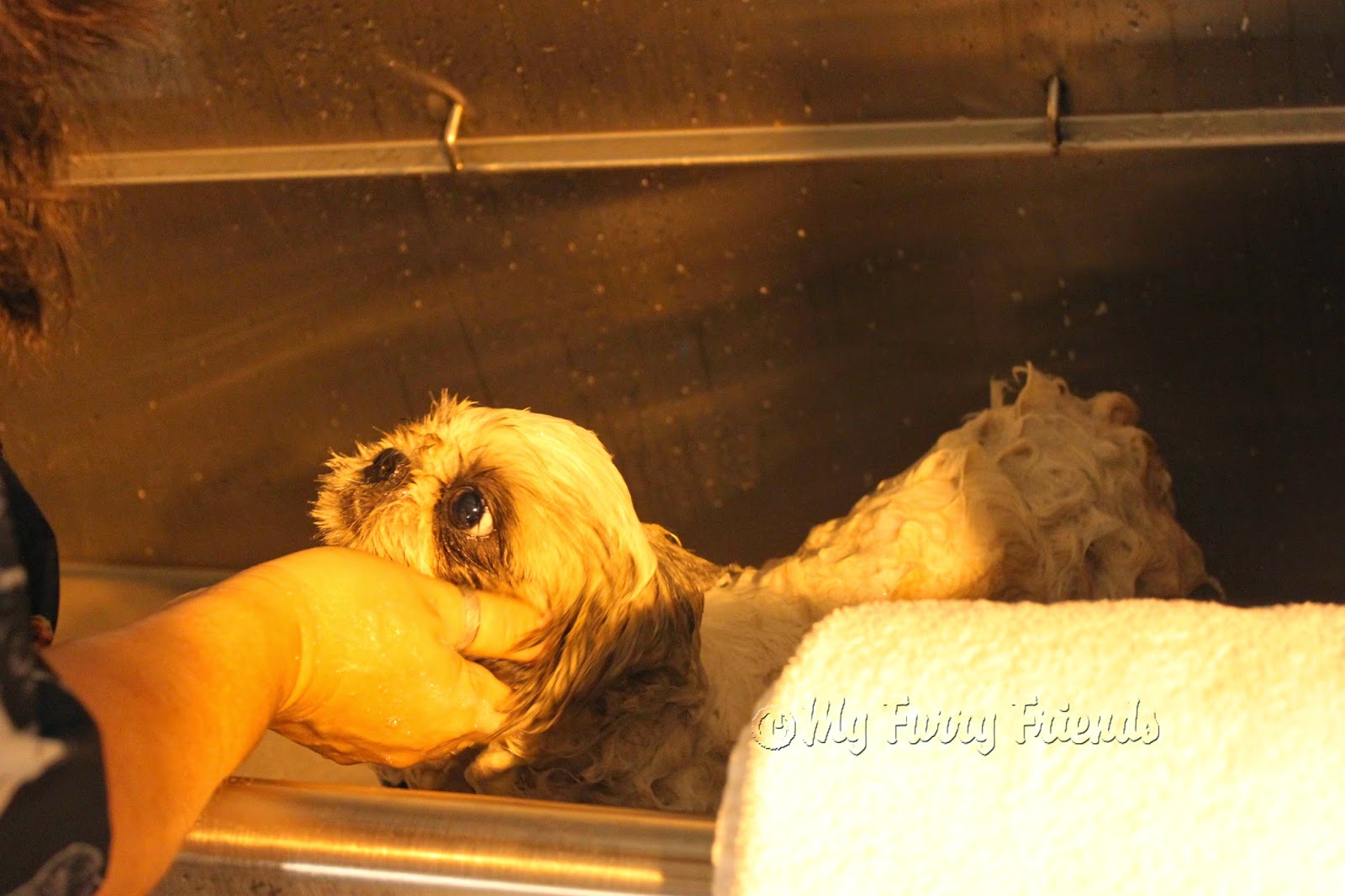 I was one of the first three groomers to get the dog in the tub.

Normally I would have soaped and rinsed this dog at least three times to get her as squeaky clean as I could, but we had a 10 minute time limit, because other groomers needed to get to the tubs.

I scrubbed her the best I could with one bath.

I mixed a whitening shampoo and a medicated shampoo that I had brought just for the competition. She wasn't what I would consider bad for the bath, but she was all over that tub.

The dryer scared her a little at first, but she took to it pretty fast.

I was able to blow a lot of the matting out of her legs, but her body was very tightly matted.

I got the mat far enough away from her body to get a #4F under the mat. 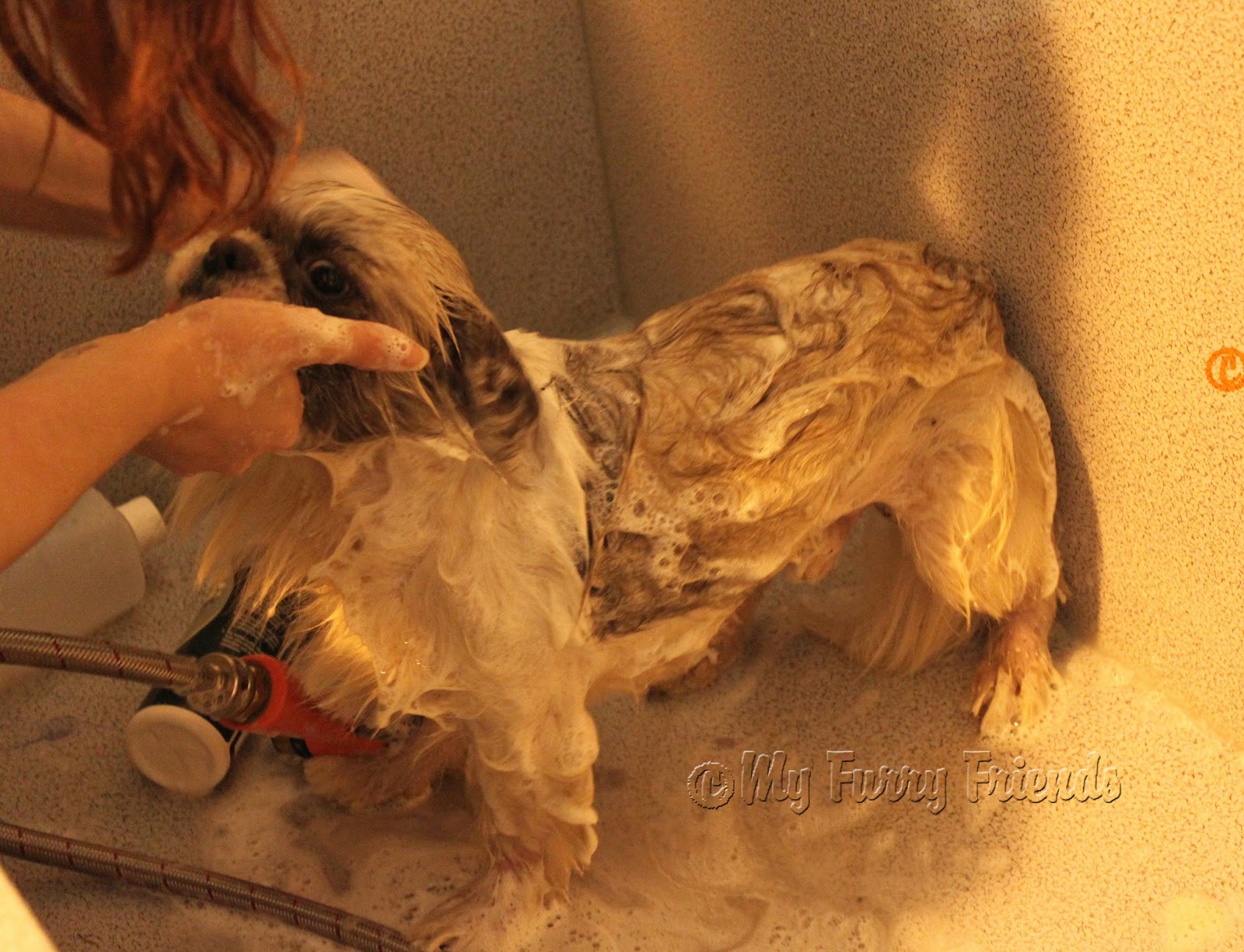 Jessica said that her dog was very good in the tub.

I think that he was so happy to get those fleas off of him. 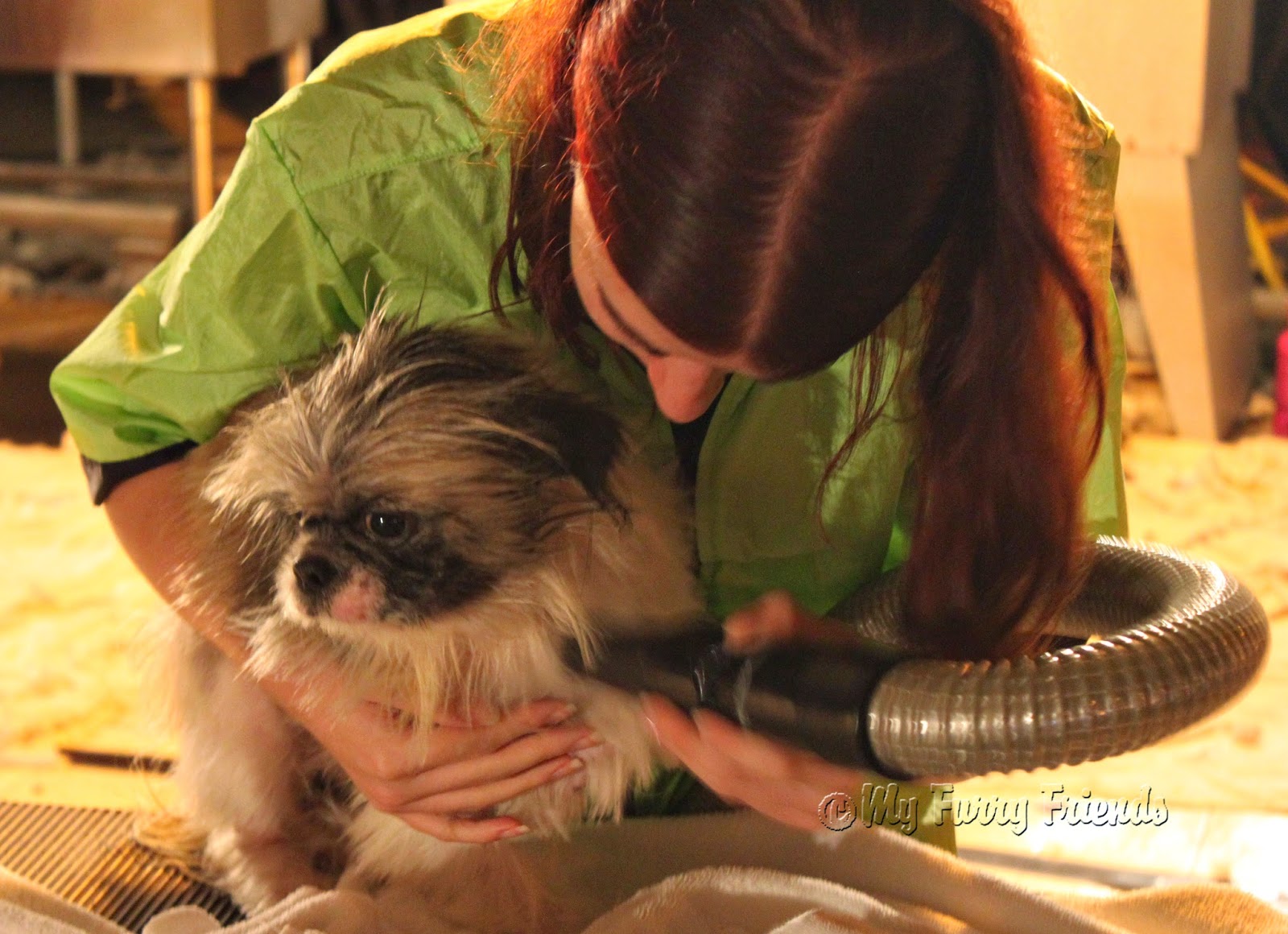 She also said that her dog was a little scared of the drier.

Sadly, it was the only time that he showed any emotion other than sadness. 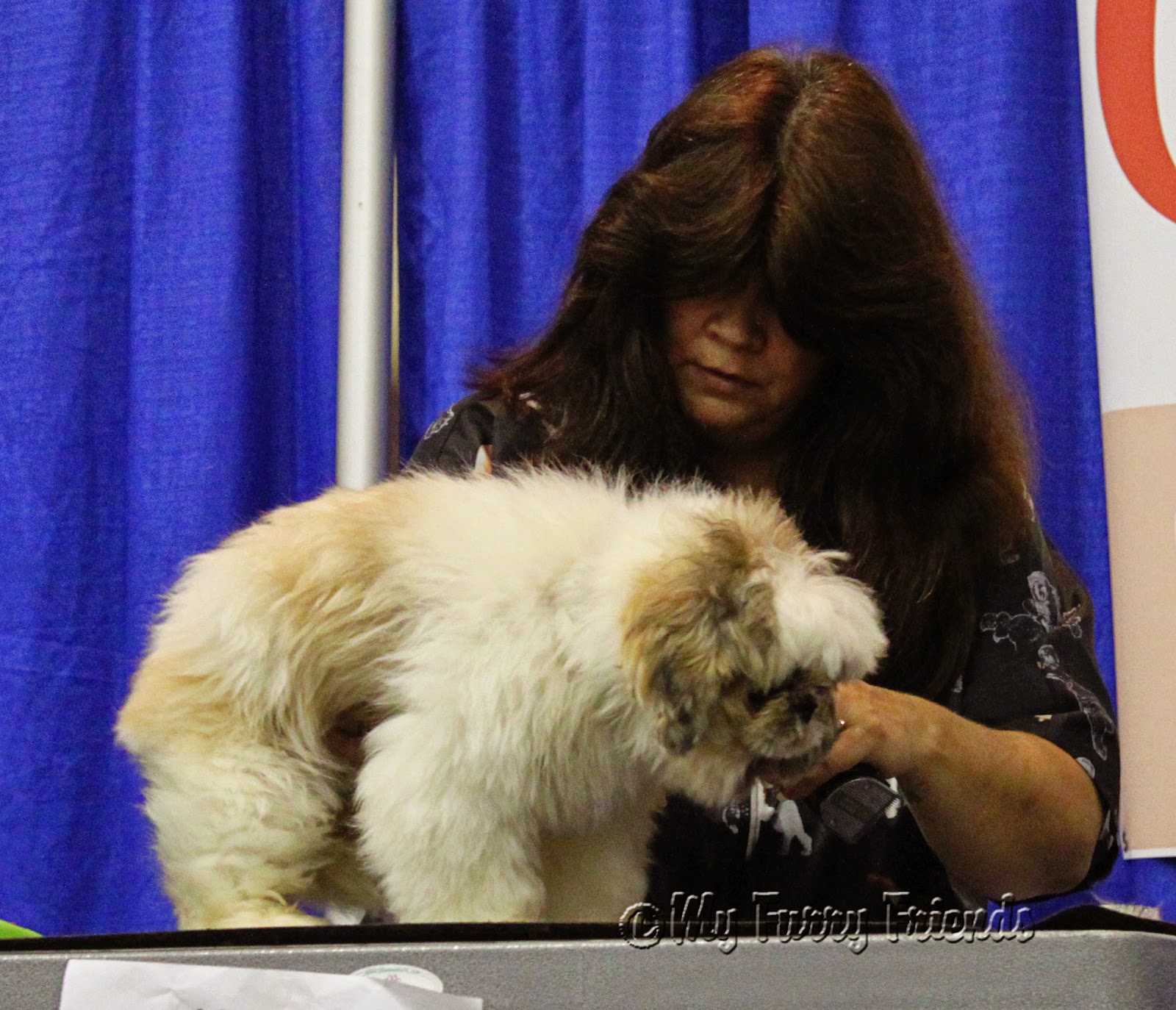 After being bathed and dried, we were back up on stage with our dogs.

Now I had to decide exactly what I was going to do with this little lady. 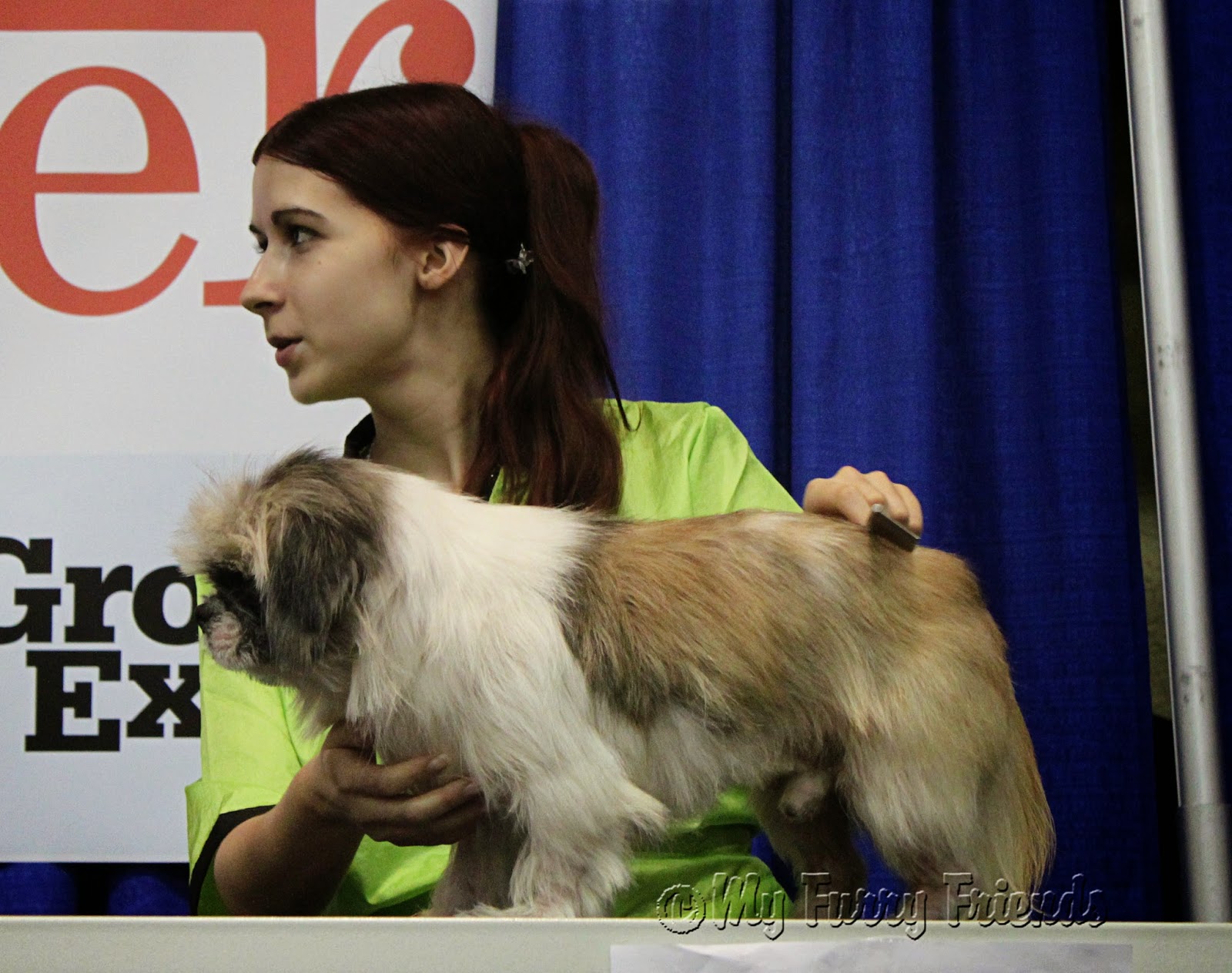 Jessica's dog had so many different lengths going on with his coat.

He had ripped so much of his hair out from chewing and scratching that he even had several bald spots. 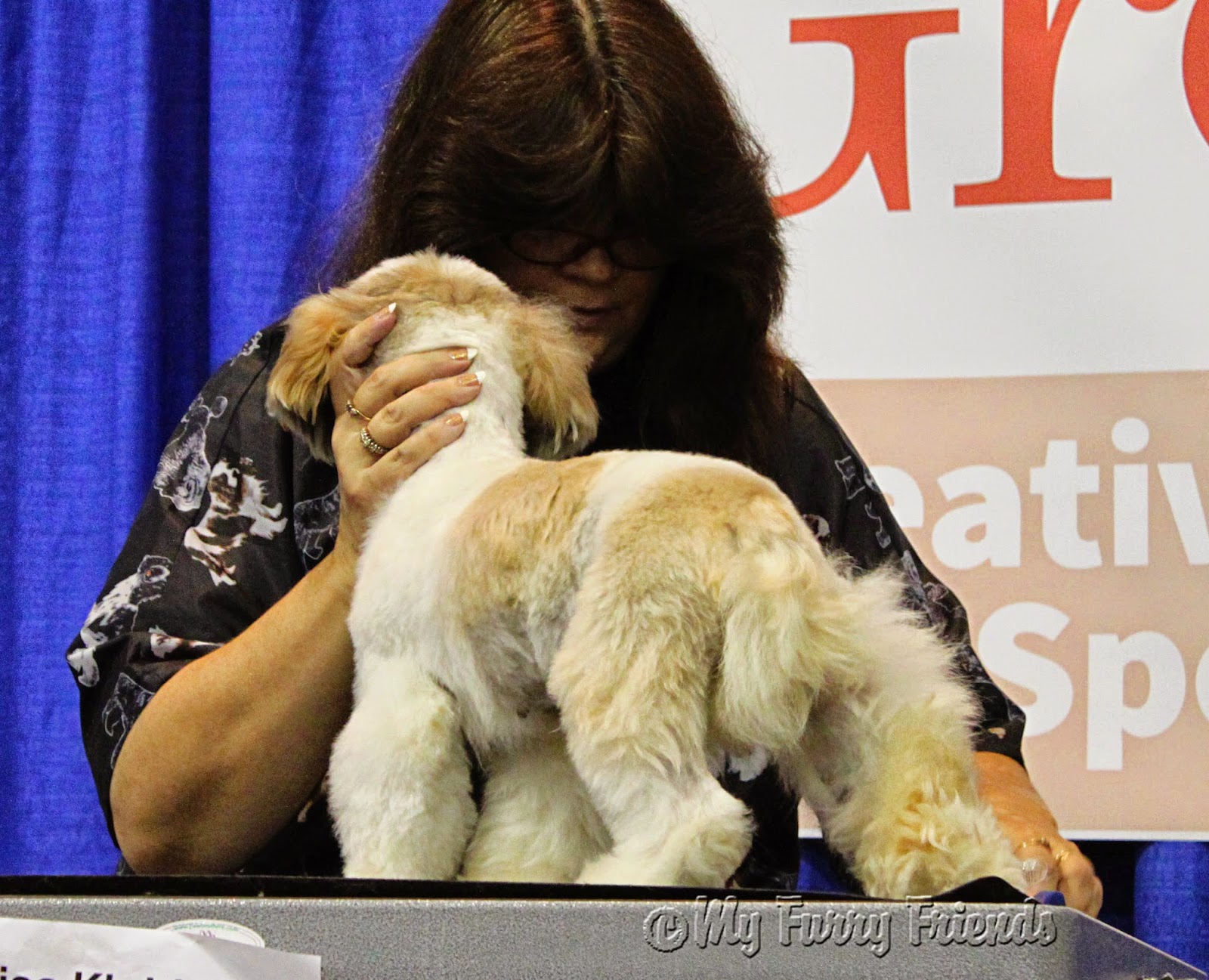 I was able to brush out the small amount of mats that were still left in my little girls legs, but the hair on her body had to be clipped off with a #4F blade.

Her face had already been shaved by someone else, but it needed to be shaped up and neatened. 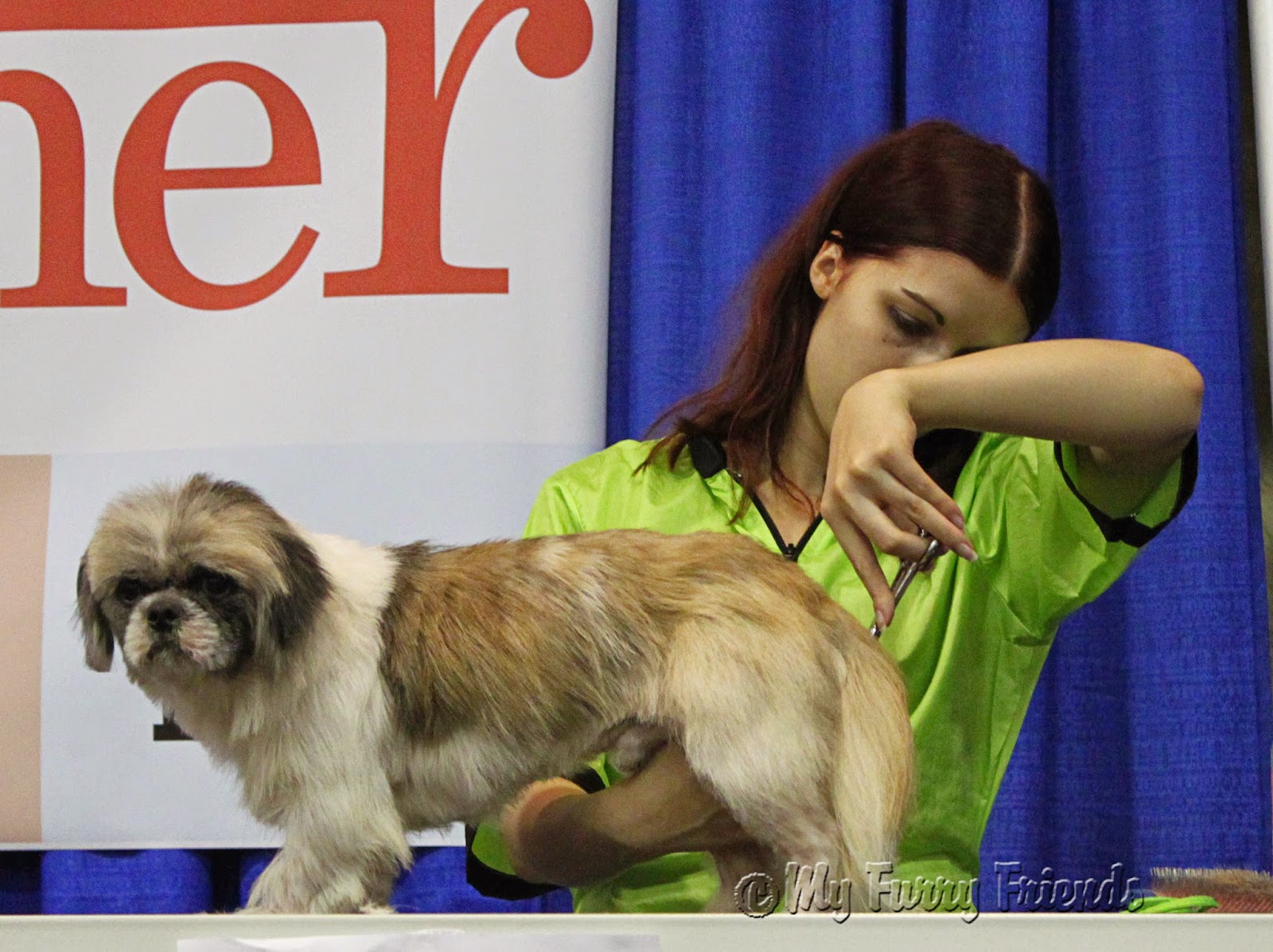 Jessica didn't even bother plugging her clippers in.

She decided to completely hand scissor her dog to try and even up all of the different lengths.

Someone had also shaved her dogs face before the competition. 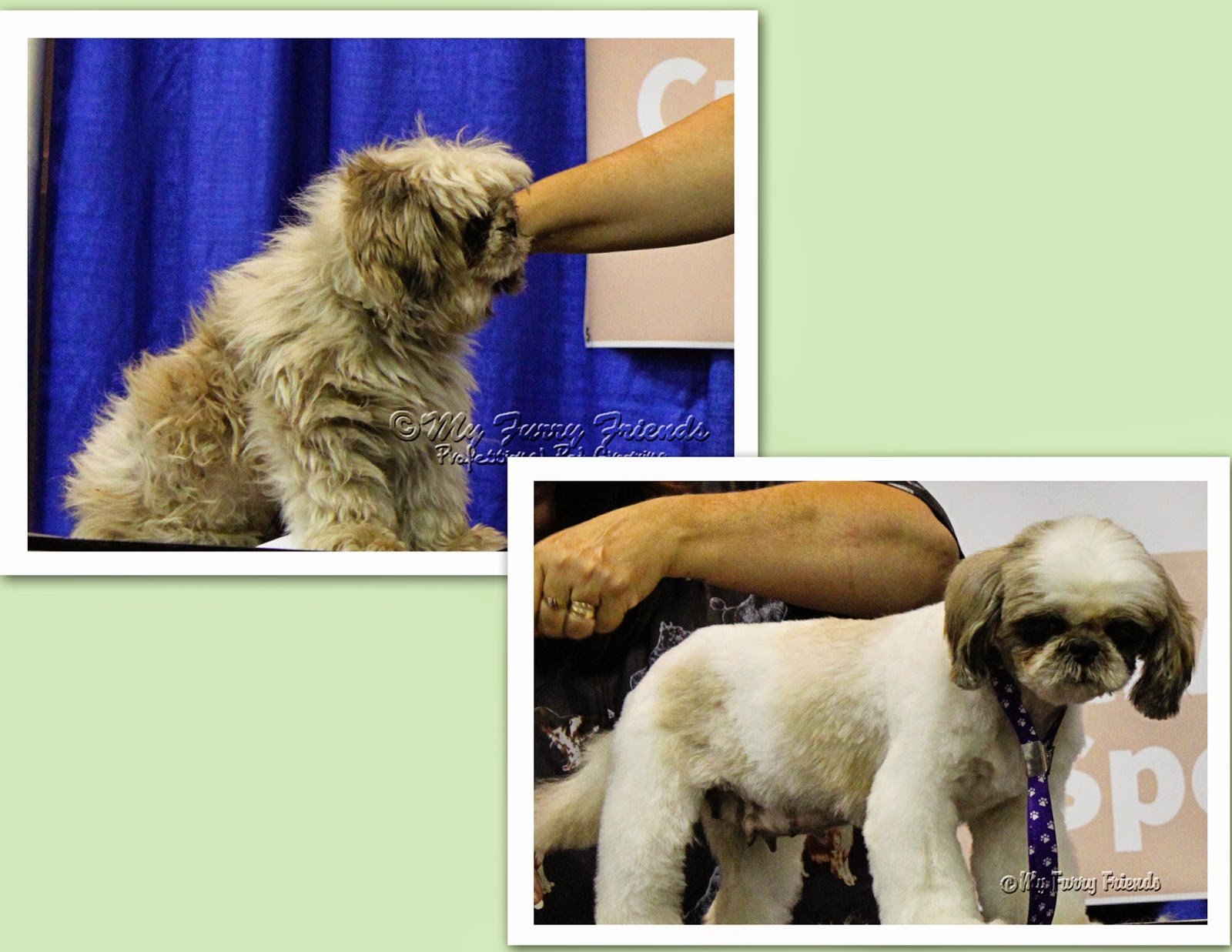 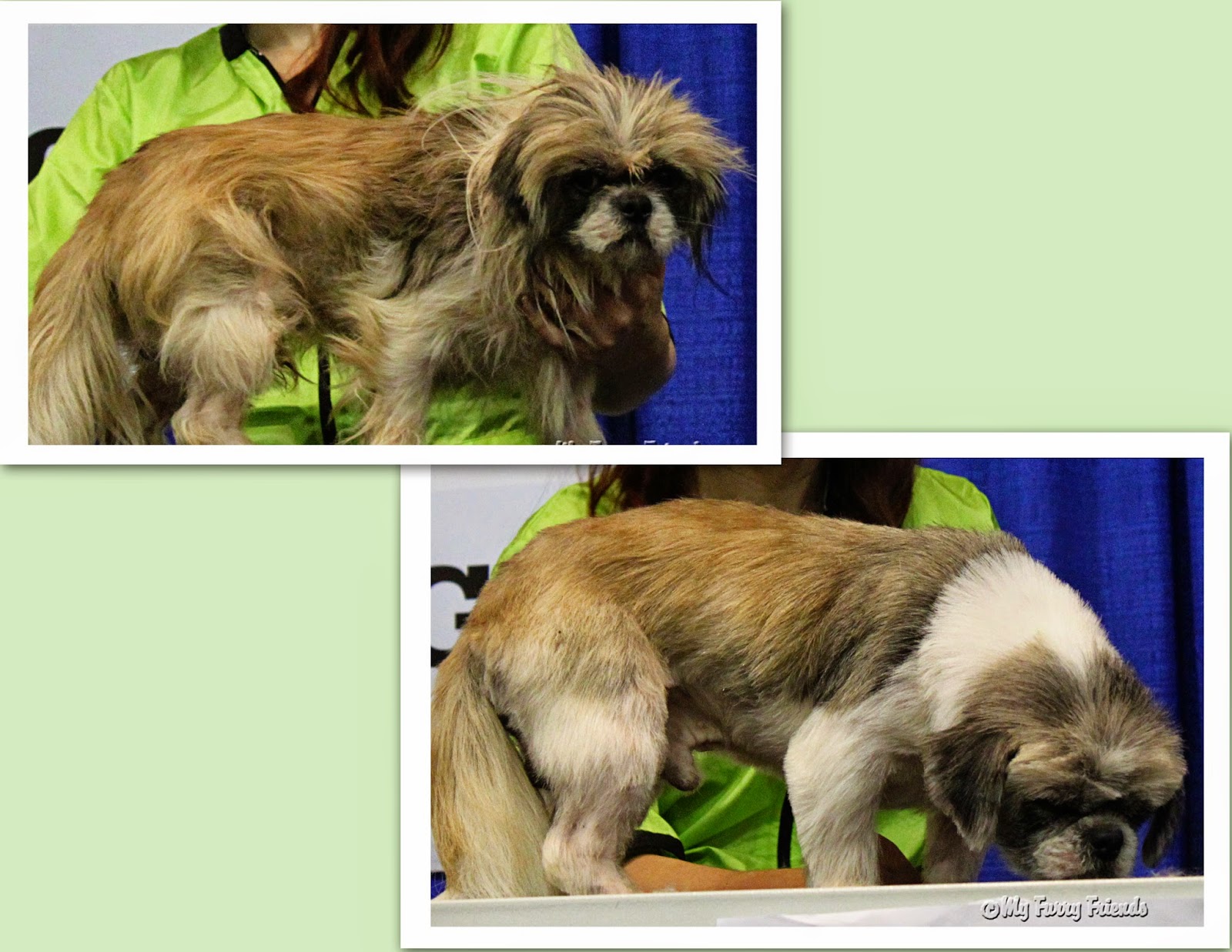 This is Jessica's dog before and (almost) after.

Now on to the other great groomers. 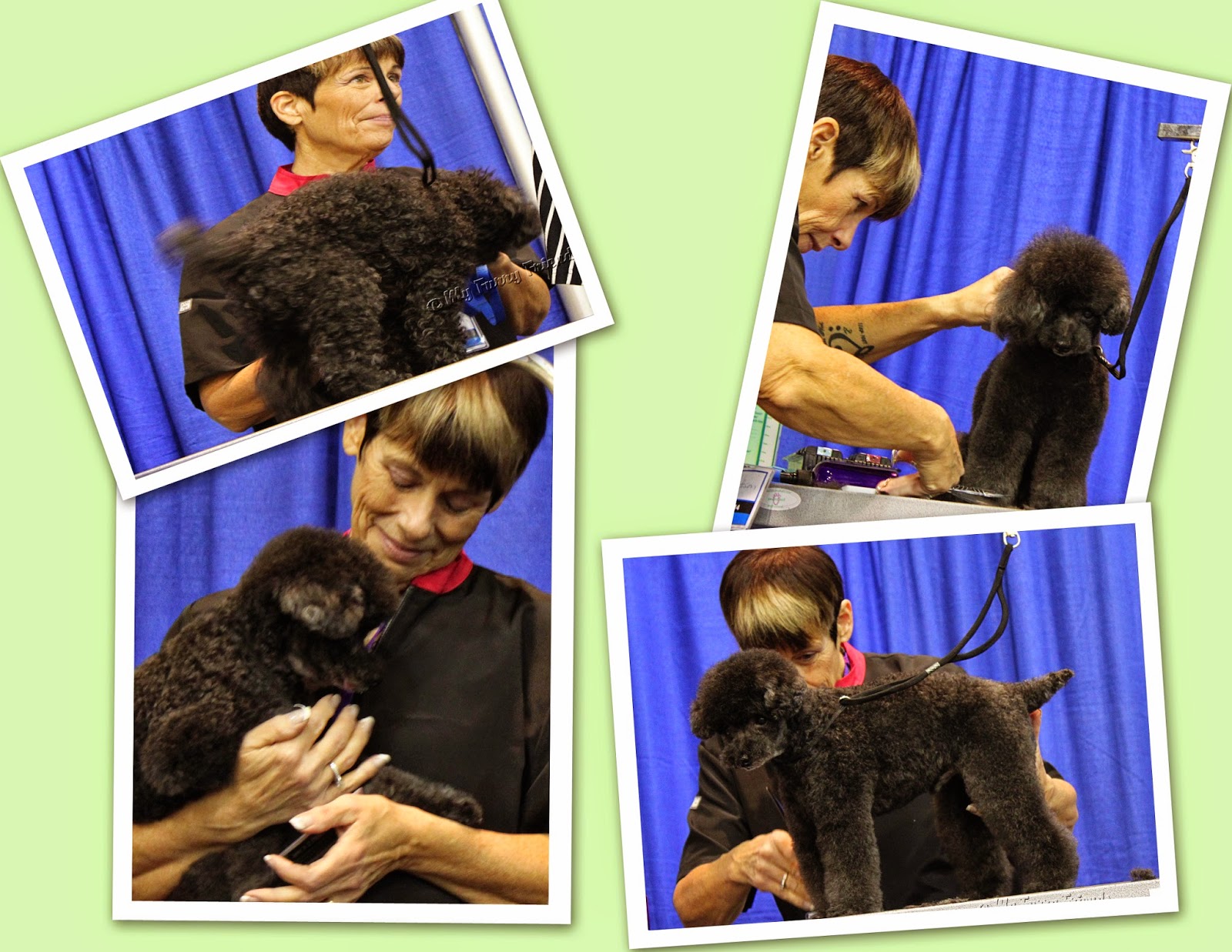 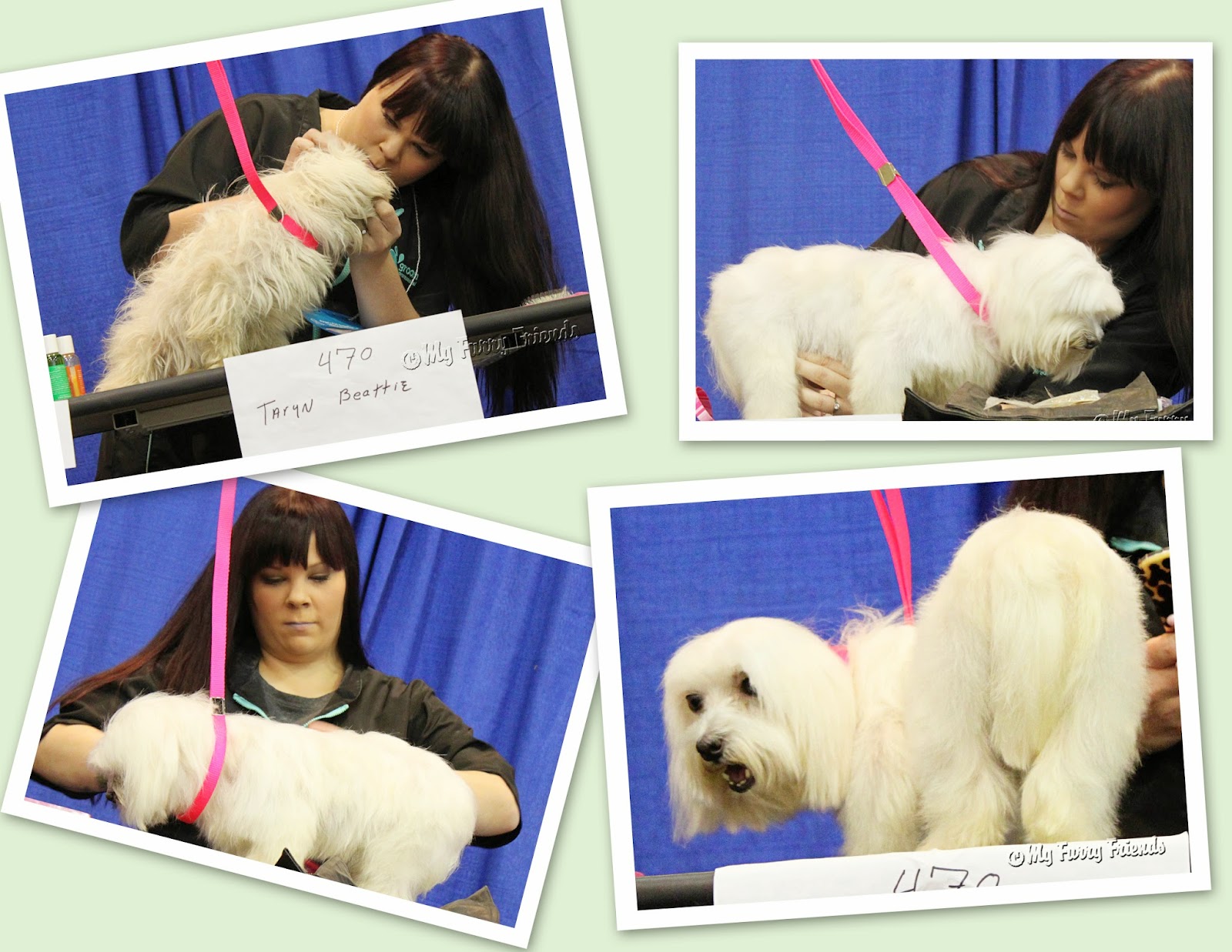 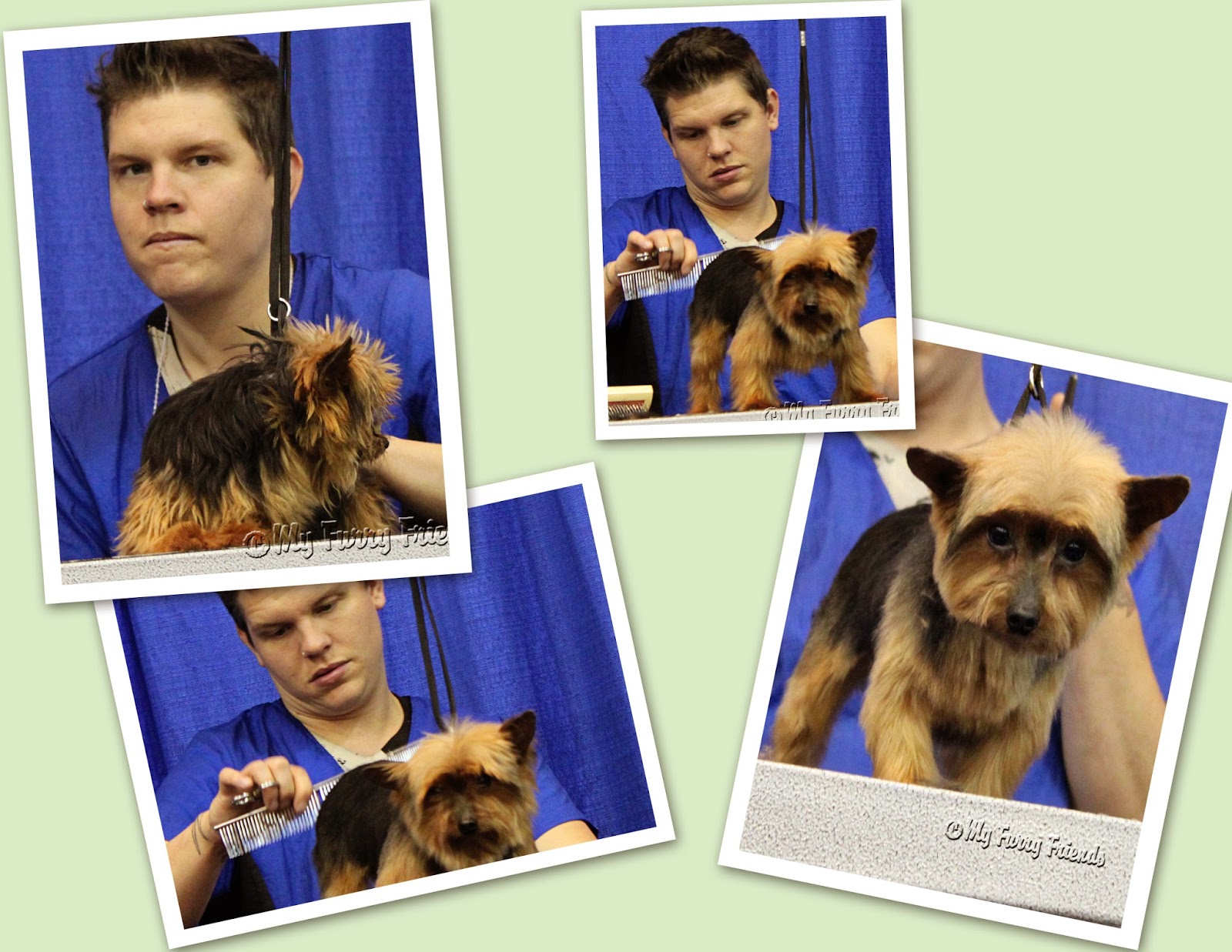 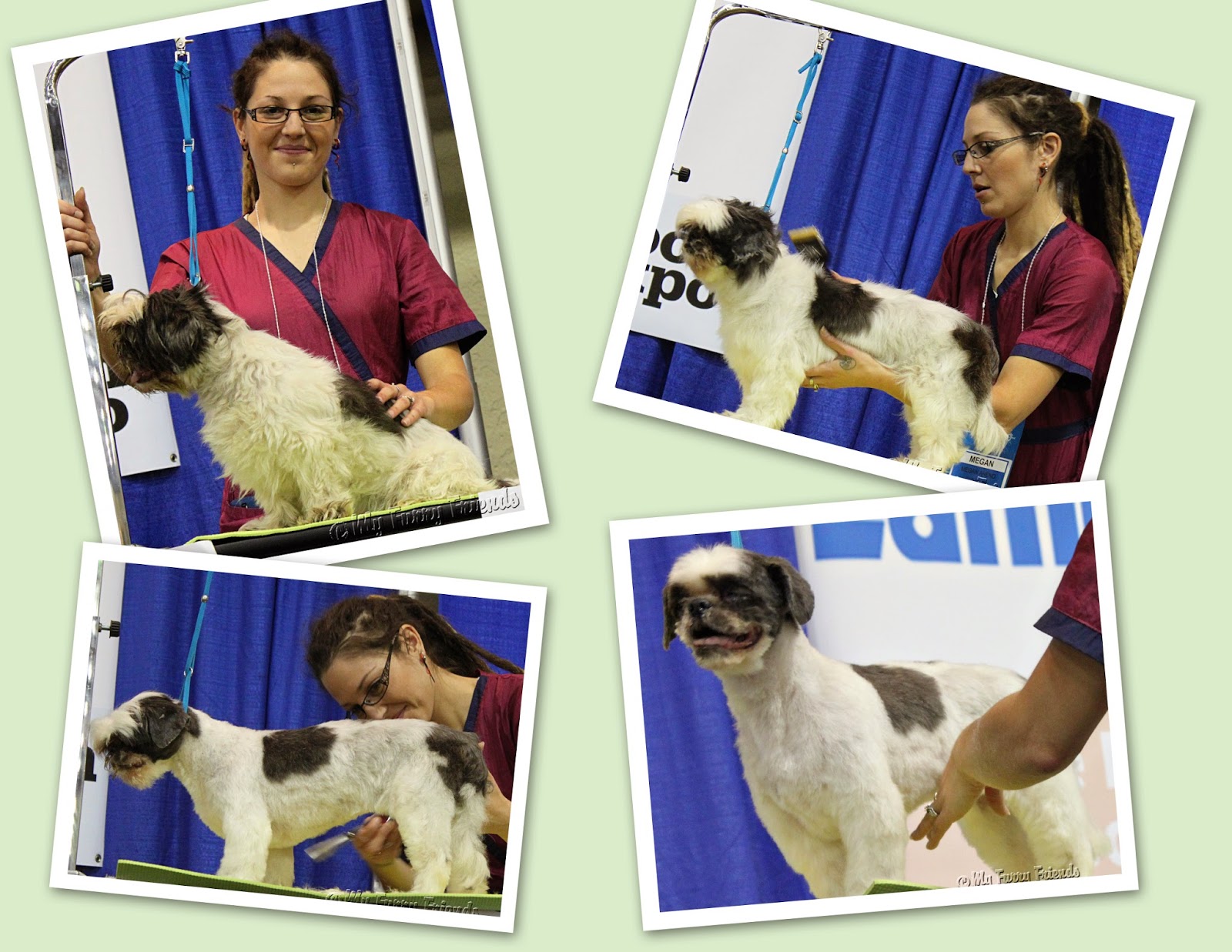 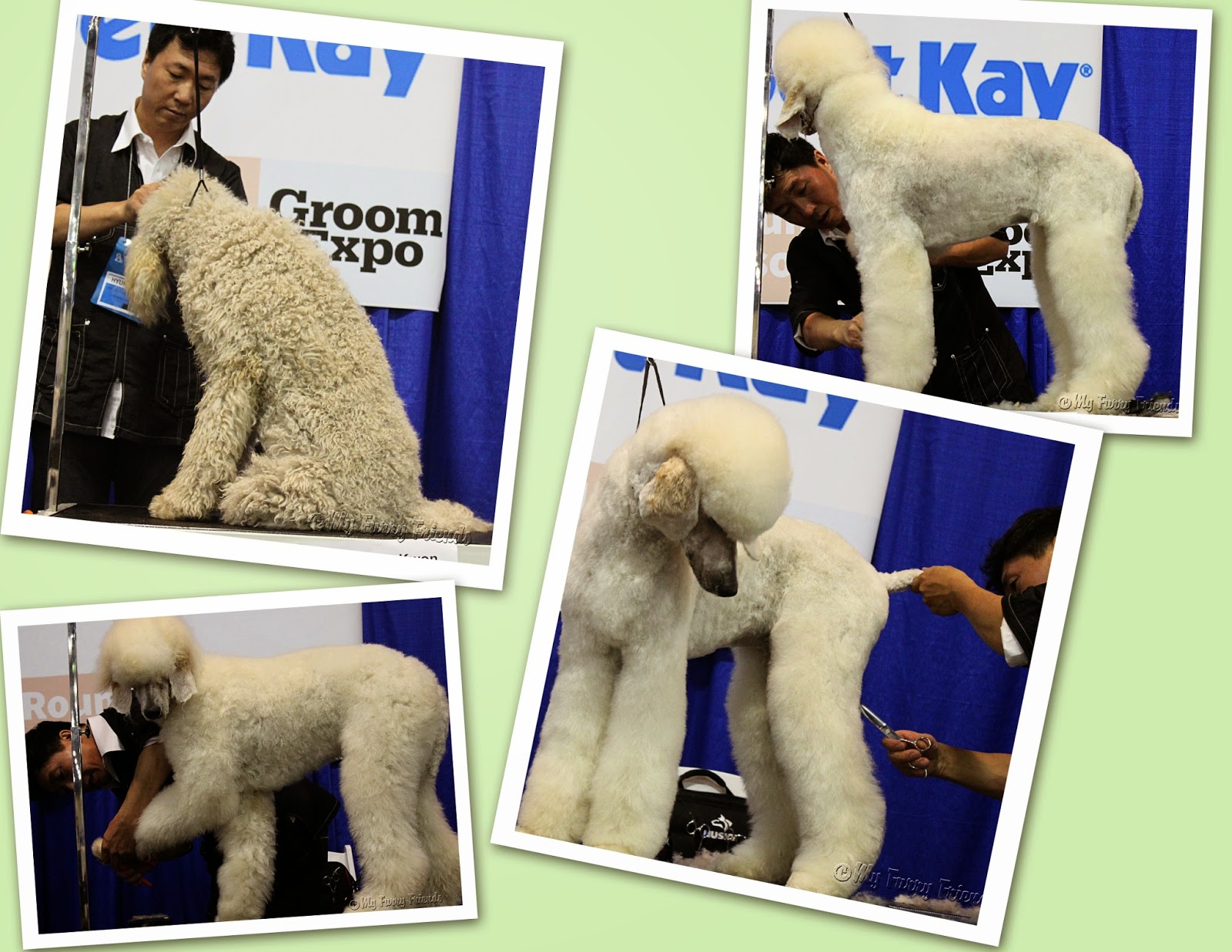 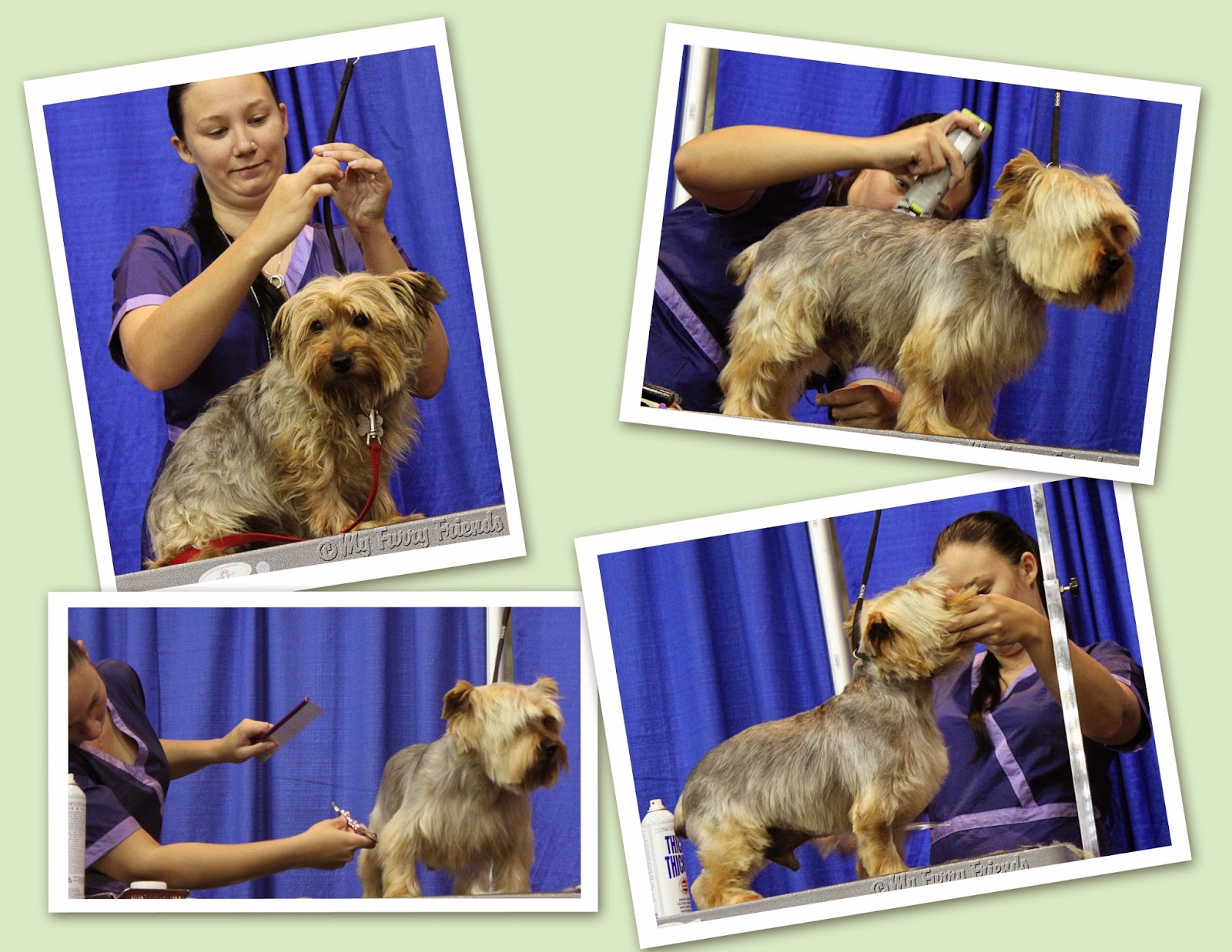 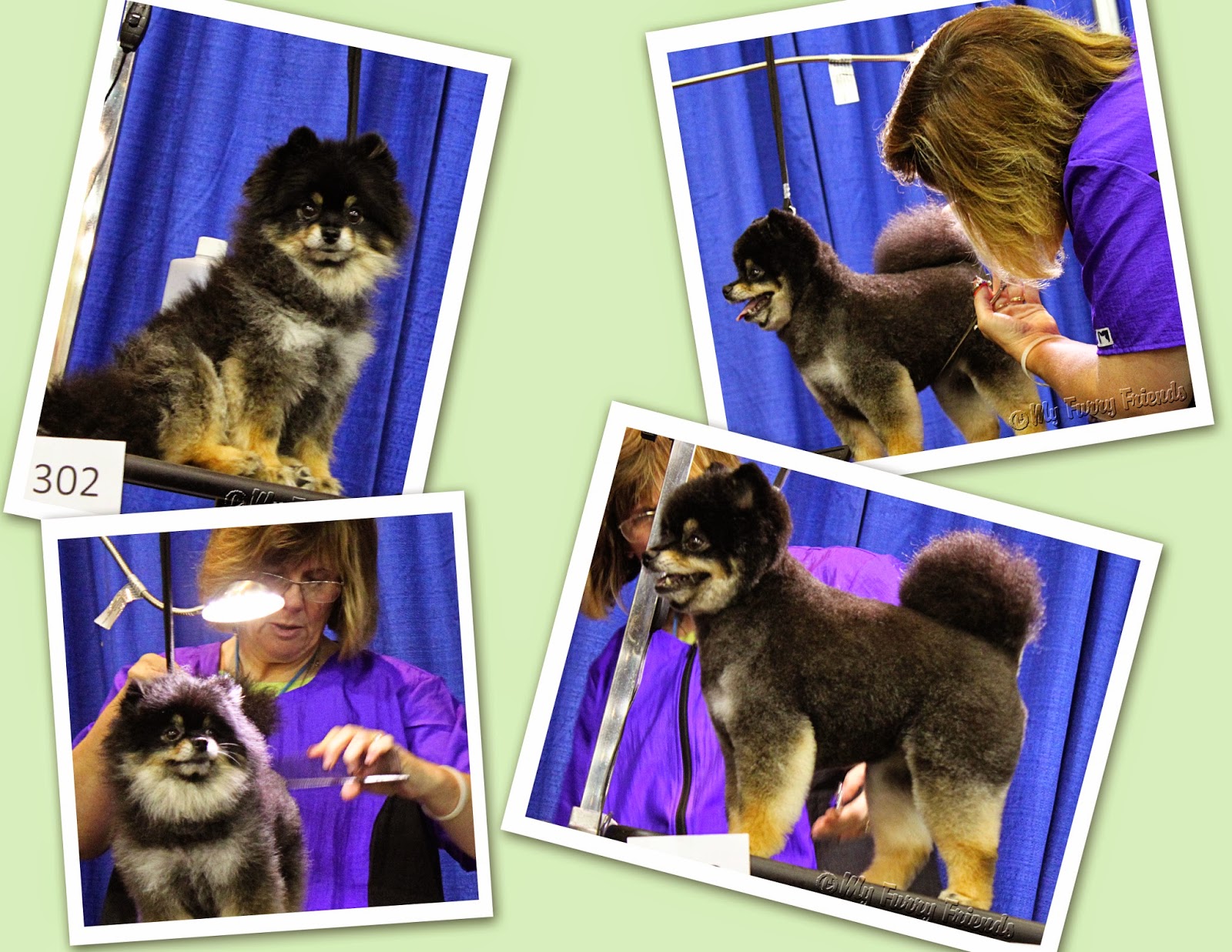 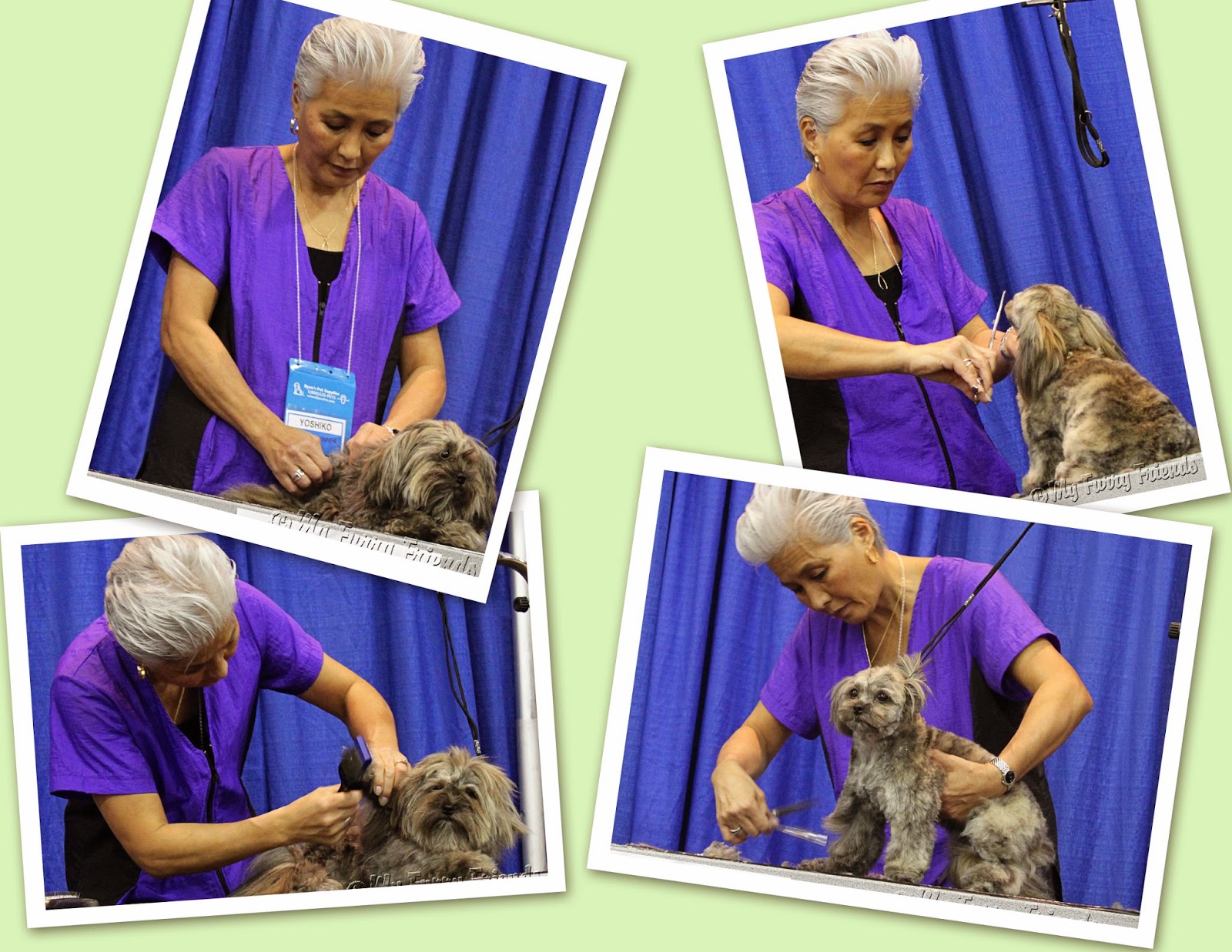 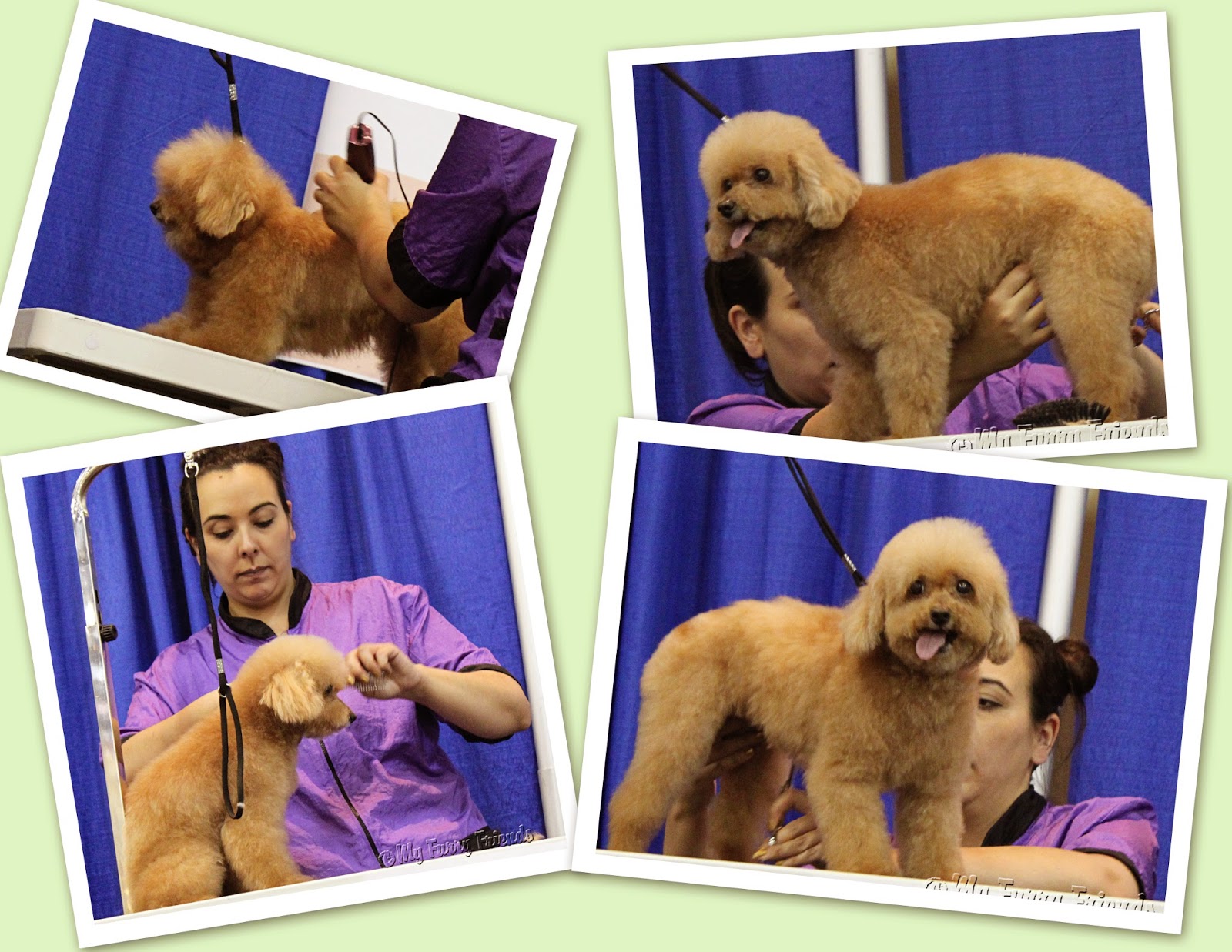 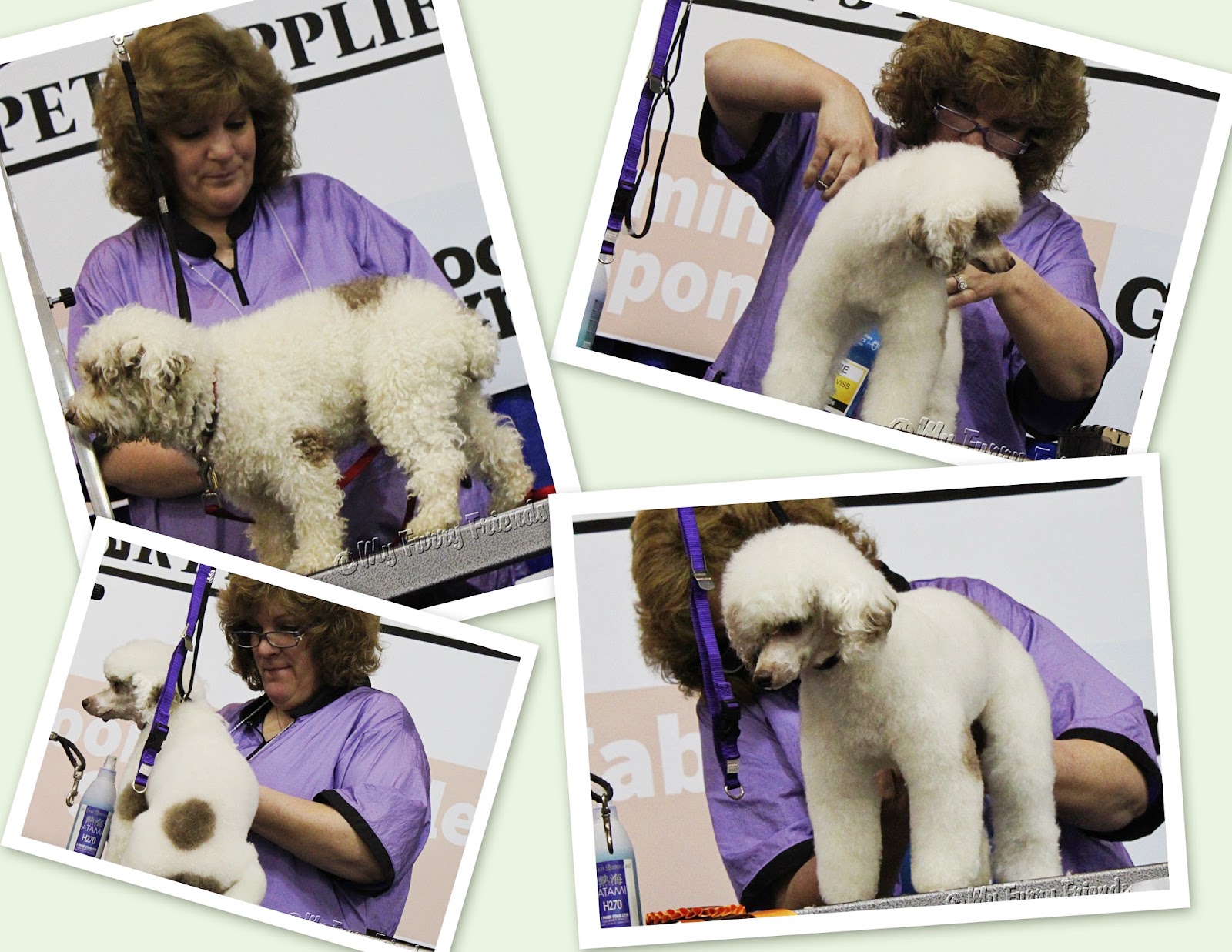 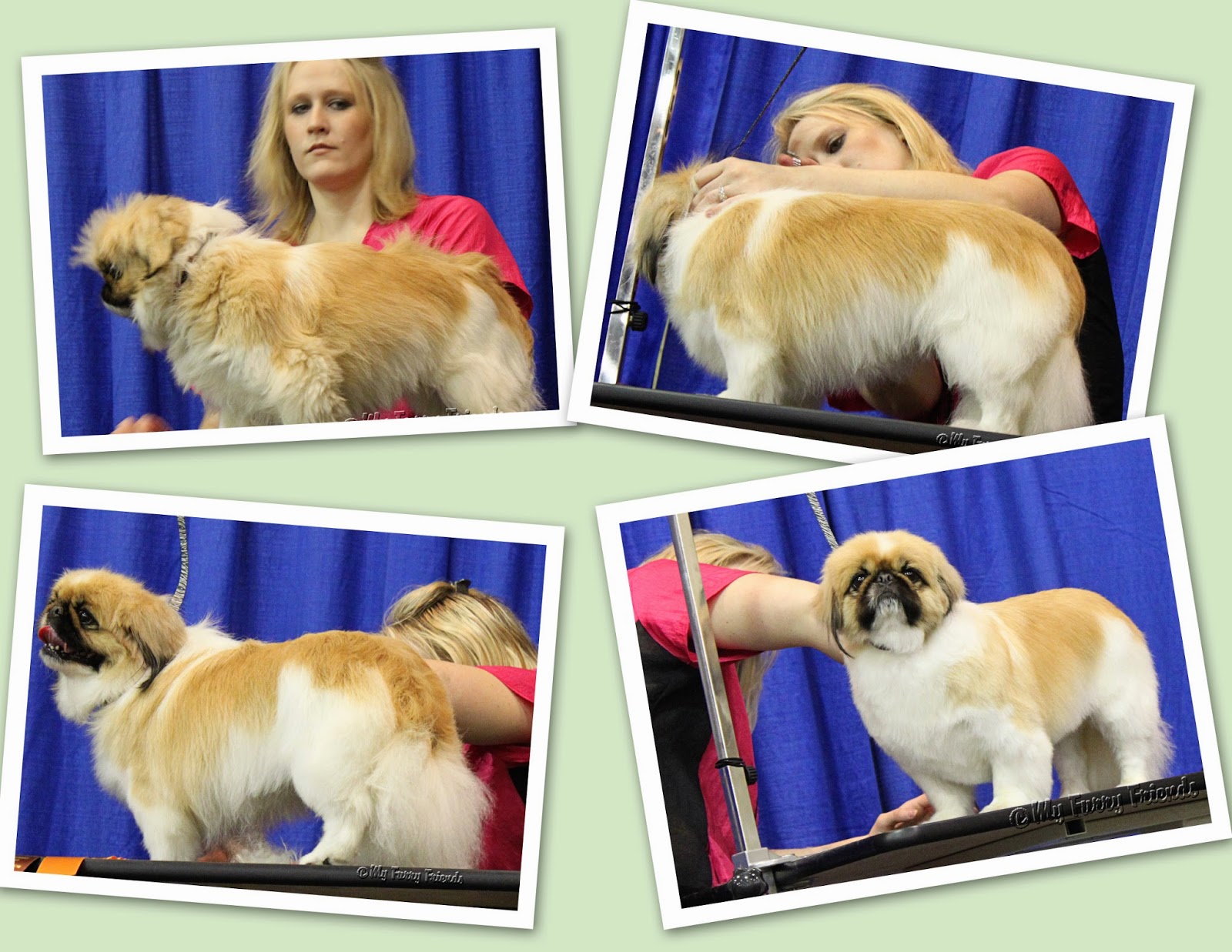 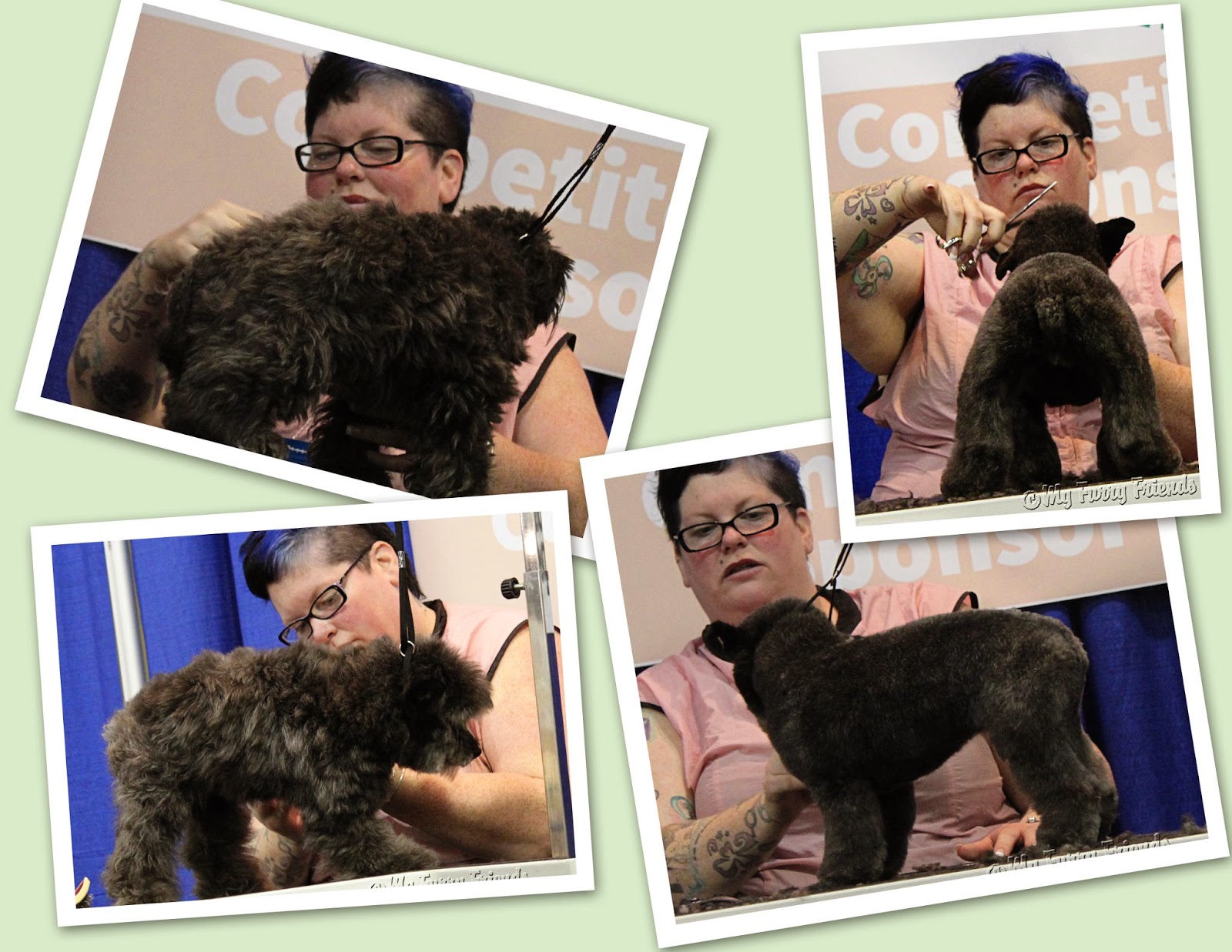 All of the groomers did beautiful work.

Now on to getting the Creative grooming picture together.
Hopefully I will have them ready before the next Groom Expo. lol