Here are some pictures from the Winners Circle Rescue Round-up at Groom Expo Hershey this year. 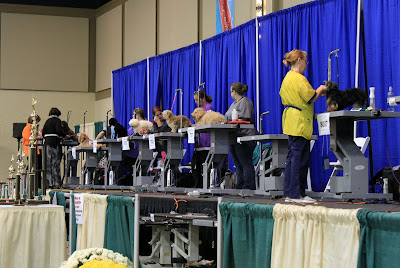 There were 16 rescue dogs being groomed in this competition. 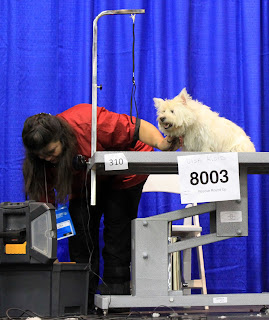 I drew a Westie this time.

She was so sweet.

I had to hold her bum up for most of the groom.

The second I took my hand out from under her, blop!
She sat right down. 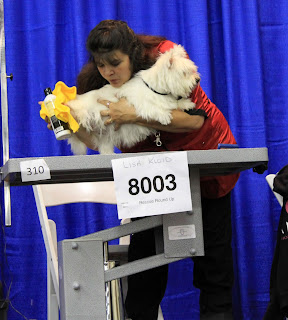 She was a little overgrown but not matted.

Of curse, when I took her downstairs to bathe her I took the shampoo I wanted to use and my absorbent towel, but I forgot a brush!

I was able to get a HV dryer this time but, I forgot my brush!

She was very good for the bath and the dryer.

Did I mention that I forgot to take my brush?!

I had to skip fluff drying her and could not brush her till I took her back upstairs. :-(

I could not believe that i forgot to take a brush. (still shaking head) 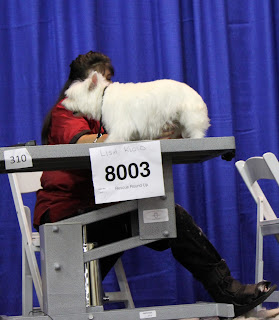 I had to sit for the entire grooming.

She wasn't crazy about having her head groomed.

Overall she did great. 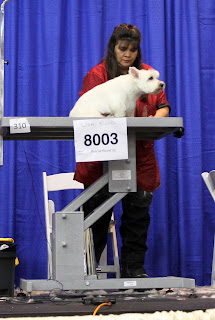 It was all she could do not to fall asleep while I was grooming her.

Here we are waiting for the Judges.

When they came to Judge her they barely looked at her and did not run comb through her at all.

I had already known that I wouldn't place, but after that I was sure.

When they did the pre-judged they teased me about winning the lottery with a sweet rescue that was in such good shape.

There were other dogs that were in bad shape with matted coats.
Also some dogs with issues.
My girl was easy and pretty normal, so she wasn't a challenge to groom and that took me out of the running.
I still enjoyed competing. 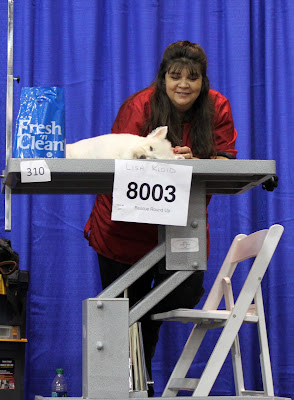 Once the Judging was done and we were waiting for the results, my little Westie decided that she was going to take a nap.

After the winners were announced the Judges came up on stage and talked to each contestant and thanked them for grooming the rescues to help them get homes.

I was told that my groom was very nice but there was not a dramatic before and after that they look for.

Well, the rescue that this little girl was from was very happy with her groom :-) 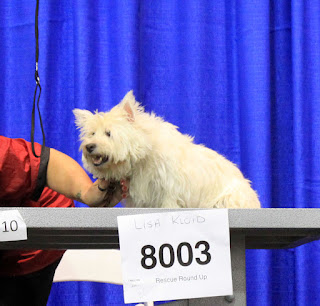 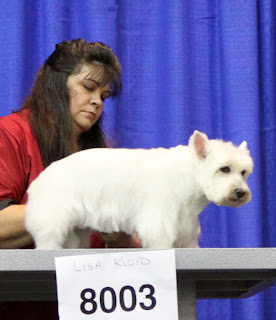 I sorry that I don't have all of the names of the winners.

I do know who won 1st place though.
And I called it.
Well, at least I thought she should place. 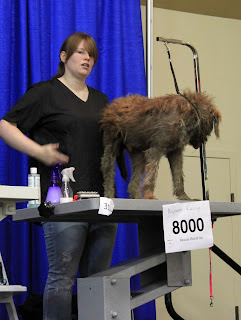 She was grooming next to me.

She did a really great job with a 10 month old puppy that was matted, it was his first grooming, and he was scared to death.

The groomers name is Alysha Kelly. 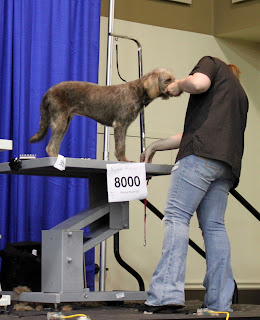 This groomer worked with this puppy and got it calmed down.

This picture does not do justice in showing how nice the finish was on this dog. 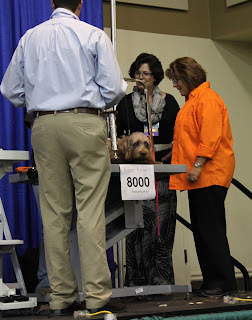 I was very happy that she won first place.

I am sorry that I don't have better finished pictures of this dog.

I am working on the Creative Competition pictures.
I have soooooo many of them.
Hopefully I will get them up in the next couple of days.

Posted by My Furry Friends at 8:29 PM