Every once in a while something happens during your work day that just sticks with you.
You have a hard time forgetting.
You replay the moment over and over again in your head trying to see if you could have done something different.
Only sometimes the thing that happened was so unexpected that you had no time to think, all you could do was react.

That is what happened yesterday.
I reacted.
Pure reflex.

I know.
You are thinking 'what the heck is she talking about here?'

Let me start from the beginning.

Yesterday I was pretty much finished for the day.
I had just walked to the front counter to put a file away when a woman walked in.
She asked me if I could clip her dogs nails.
She said that she had just gotten the dog off of Craig's list last Saturday.
She also asked if I could trim up around the dogs eyes and the rear.
The dog was around one year old and the woman thought that the old owners had home groomed the dog because the hair was so chopped up.

I told her that she could bring the dog in and I could do the nails and trim while she waited.
I did ask her what breed the dog was, she said; "He is a French Poodle."

The dog she brought back in was a medium sized Poodle/ Bichon cross.
Yes, its hair had most certainly been hacked to pieces.
I guessed that the previous owner had been afraid to scissor around the eyes because the hair was still long there.

The new owner had the dog on a leash and also had a winter coat on it.
I could tell that the dog was scared.
I took the leash from the owner and started talking to the dog.
He was very scared and every time I tried to pet him he darted away.
I asked the new owner if she knew if the dog had ever been professionally groomed.
She was not sure but did not think so.
I didn't think so either.

I continued to softly talk to the dog and tried several times to pet him, but he wanted nothing to do with me.
I next tried to just pick the dog up.

For frightened dogs like this one, I pulled the lead forward to keep his head away and reached my arm under his belly to scoop him up.
This technique works for me 98% of the time.

Not this time.
This little guy was so quick and wiry that he jumped right over my arm and danced out of the way.
Okay, fine.
I was going to try something different.

So, I straightened up.
I still had the dogs leash in my hand.
I turned toward the new owner to ask her to pick up the dog, and that is when it happened.

The dog was about two feet from me when he charged.
Yes, he charged.
He charged so fast.
He charged, jumped up and bite me just above my knee cap before I even had a chance to register what he was about to do.

I knew he was scared, and even got the vibe that he may be a fear biter, but to charge me when I was no longer trying to touch him?
That I did not expect.

But charge me and bite me he did.

Then I did something I still feel horrible about.

As his teeth made contact with my leg, I automatically took the leash that I was still holding and yanked him away from me.
He was between me and an end table that sits between two chairs in my lobby.
As I yanked him back he hit into the end table.

His new owner grabbed him up immediately and ask me; "Did he get you?"
My answer; "Oh my gosh, is he alright?! I am so sorry that he hit the table!!! I just didn't expect him to lung like that!"
"He is fine, he is fine. Did he get you?" she asked again. 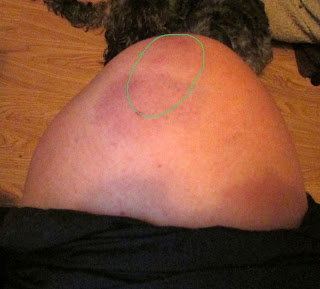 He barely broke skin through my pants, but he bit down really hard.

The green circle was his mouth, the bruised area makes it look bigger.

Funny how at the moment that the dogs new owner asked me that question, I suddenly felt the intense pain in my knee.
Boy, did it hurt, but I was still in disbelief.
Disbelief that he had charged me like that, and especially disbelief that I had yanked him back into the end table.

I felt so bad.

I asked the owner to turn the dog towards her so that he could not see me and then slowly slipped my hands under the dog next to the owners arms and told her to let go.
Then I quickly brought the dog up into my arms.

Now, please don't think that I am totally stupid.
Believe me, the thought did cross my mind that this dog would twist in my arms once he realized it was me holding him and go for my face.

I quickly brought him close to my body keeping him low around my waist so that I could gently drop him to the ground if he went after me again once he realized that I was the one holding him.

So, what did he do when he realized he was in my arms?

He looked at me and settled right down.
I still felt like crap.
I kept picturing him hitting the table.
But, I was relieved that he had calmed down considerably.

Now, how would he be on the table.
Would he be a little land shark?
Did I mention that he was not neutered?

He was still a little scared.
Still the potential of a fear biter.
He was not crazy about having his head held to be scissored, but some soft sweet talking cured that.
He was great for having his nails trimmed.
He didn't care in the least that I was fooling with his feet.
He also had a pretty nice coat even if it was all chopped up at the moment.
He just needed someone to work with him and get used to being groomed on a regular bases.

When I took the dog back up to his new owner, I told her to find a groomer that would work with her dog to help it learn to like the grooming.
I was sure that she would not want to bring her dog back to me after I yanked him into the end table, even though it had just been reflect reaction to him biting.

She did want to bring him back to me and set up an appointment right then and there.
I was very happy.
I know he bit me and yes, it still hurt today.
But, I want to work with him.
I have a feeling that if this new owner does bring him regularly he will turn into one of my favorites to groom.
It will just take a little time.

And yes, I fully expect that he may try to bite me again till he gets used to me.
I won't be caught off guard the next time.

I can't wait to see how he does for a full grooming.
I'll update then and tell you how he did. :)