There is a reason why German Shepherds were not meant to be clipped.

There are just some coats that are a pain to clip and look really awful when clipped. 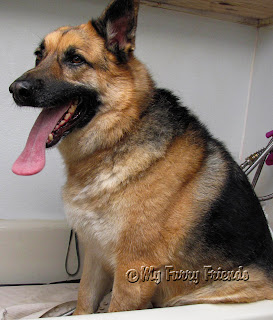 This Shepherd has been coming to our Self-Serve.

We have not professionally groomed him before.

His owner had come in a week earlier asking about having him shaved down.

Apparently we were not the only people warning him about messing up his dogs coat if he shaved it off.

He had also had other people (who had Shepherds) tell him that it was okay to shave them, and that their hair always grows back.

I didn't hold back when talking to him.
I said everything that I could think of to talk him out of shaving his dog.


He talked about having a baby and a very young toddler at home, and that the dog was shedding so much that it was really bothering his wife.

I told him that his dog would still shed, just shorter hair.

He left his number for us to call him if a Saturday appointment opened up.
We called him when the lady with the three Yorkies hung up on my husband.
We gave him their appointment.

He is a very nice German Shepherd, but like so many Shepherds, he was nervous and scared to death.
He is 5 years old and had never been clipped before.
He was loaded with undercoat.

I was not about to spend an hour or more trying to fight a blade through that thick, dirty coat. 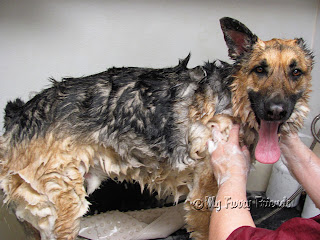 So he went straight into the tub.

He immediately plastered himself to the front edge of the tub.
I could not get him to move or stand up to save my life.

So I started bathing him while still smashed up against the side of the tub.

Needless to say, my floor was flooded in no time.

He eventually started to relax the more that I rubbed him and talked to him. 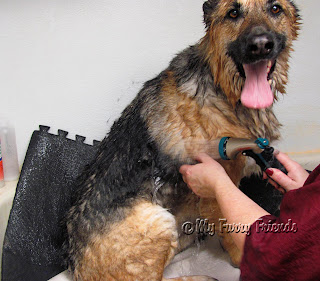 The one thing thing that he was doing consistently, was destroying the tub.

You had to move him very slowly or he would panic, pushing my tub mats all over the place. 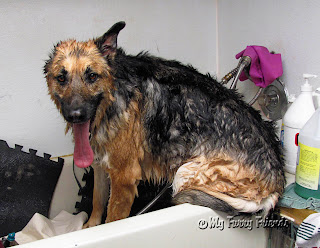 Then we were back to the edge of the tub, with all of the water and shampoo dripping onto the floor.

As you can see, I gave up on trying to keep the tub mats under his feet. 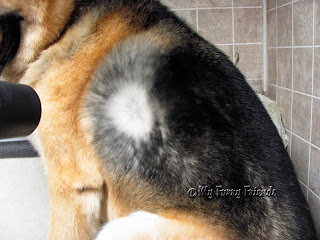 He was really good about being blow dried.

It took 45 minutes, but he was completely dry, (except for the edges of his ears) and all of his undercoat was gone. 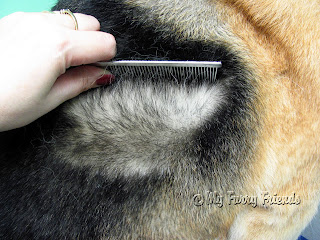 I was able to easily glide a comb through his entire coat.

Look at all of that cream colored coat under the black top coat.

I told the owner that all of the beautiful black and tan of this dogs coat was going to be clipped off.

I told him that the hair underneath would look ugly.


I didn't hold back.

I didn't want this owner to be shocked when he saw his dog.

Are you ready to see him?

Let me say first, before you look at him shaved.

The cut is not as smooth as I would have liked.

I tried to clip him with a 3/4 inch clip comb.
It didn't take him short enough.
The owner would have thought that I left him too long.

I tried a #3 3/4F blade, but it just laughed at that coat.
It would cut in some places and just glide over the hair in other places.
So I used the Yellow 5/8 inch clip comb.

I did think about using the clip comb in reverse on the coat, but I have seen some coats really damaged by clipping against the grain, and I didn't want to do anything more to hurt this coat.
I also could have just taken a #7F blade and shave to get a nice smooth finish, but I didn't want to take him that short. 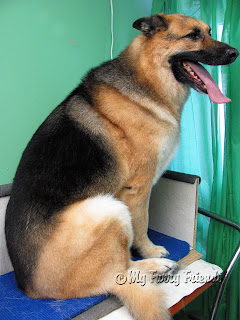 I still can't believe I took him from looking like this..... 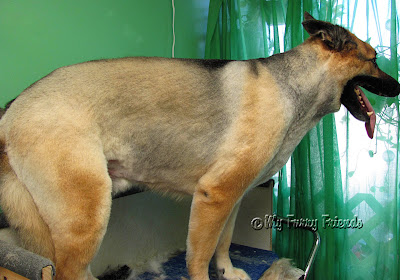 I am so sorry buddy.

If you where my dog I would never do this to you.

I hope your owner never wants this cut again.


Yes, the owner was shocked.

If I ever have another Shepherd or Golden owner ask me to shave their dog, I am going to pull out this picture.

Happy Grooming, MFF
Posted by My Furry Friends at 2:41 PM